Local Lions Everywhere During Round 9 Bye 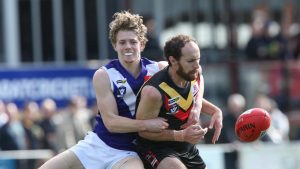 With the Lions having a bye this weekend, there was plenty of action around local football as several Coburg representatives picked up big wins.

Starting in the Eastern Football League, Hisham Kerbatieh held his own for Doncaster East, kicking one goal in a 21-point win against Lilydale.

Adam Swierzbiolek and Jack Sandric both impressed for East Ringwood, kicking one goal each in their match. Sandric was also among his sides’ better players, despite losing to Division 1 reigning premiers South Croydon by 83 points.

In the EFL reserves, Alex Mioni played his part for Norwood, kicking one goal in their 47-point win over Montrose. His efforts were also rewarded as he was listed as one of the better players on the day.

Moving over to the Northern Football League (NFL), Luke Bunker, Pete McEvoy and Sam Binion tore it up for Montmorency as they went on to beat Whittlesea by 59 points. Bunker did well in his second game back after recovering from his knee injury, while McEvoy kicked two goals. Binion booted one and was named amongst Montmorency’s best.

Another trio in Michael Ercolano, Aidan Tilley and Mark Kovacevic all featured in West Preston-Lakeside’s 27-point win over Greensborough, with Ercolano also named among best on ground.

Staying with the NFL, duo Josh Iacobaccio and Daman Aujla dominated for Bundoora. Despite the eight-point loss to Macleod, Iacobaccio earned himself a best on ground performance; Aujla was also named in the best after kicking one goal.

Shifting over to the EDFL, it was a battle of Lions, with Tom Wallis, Lachie Mitchell and the Essendon Doutta Stars going up against Tom Condon, Logan Morey and Strathmore. It was Condon who stood out from the group however, booting two goals and being named among Strathmore’s best in their 64 point win. Wallis was also named amongst the Doutta Stars’ best despite the loss.

Jackson McDonald suited up for Glenroy, having a solid game despite going down to Pascoe Vale by 89 points, while Brad Bernacki kicked one goal in East Sunbury’s 79-point win over Burnside Heights.

In the Ballarat Football League, Mark Orr did what he does best kicking one goal and named among Melton’s best in their 73-point win over Redan.

Despite the 45-point loss to North Ballarat City, Mitch Conn and Josh Guthrie played hard for Sunbury, with Guthrie named among the best.

It was a long day out for Nick Mellington and Caroline Springs in the Western Region Football League, going down to Deer Park by 140 points. Mellington was able to kick one goal in his side’s effort.

In the Southern Football League, Josh Fox did what he could for Cheltenham, going down by 75 points to a strong Mordialloc side.

Wrapping up this weekend’s games, Max Mitchell-Russell and Port Melbourne Colts went down in a close seven-point finish to Bentleigh. Despite the loss, Mitchell-Russell had a day out, kicking three goals and named his sides best on ground.

A mixed bag of results for the Local Lions, plenty of exceptional performances might make team selection difficult for the coaches heading into Round 10.

Be at Windy Hill from 12pm this Sunday to see Coburg come back fresh from their bye, as they take on Essendon.

Leave it to Lever