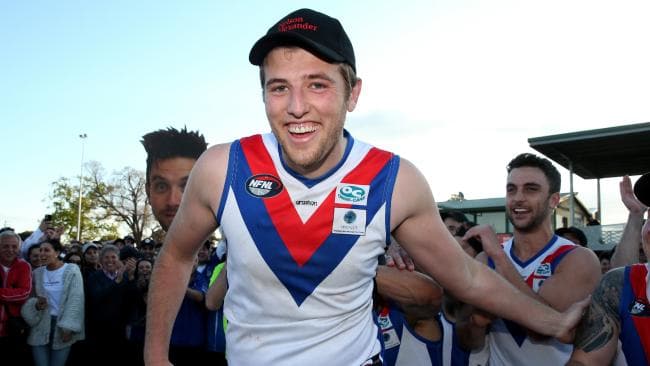 Coburg duo Mark Kovacevic & Aidan Tilley finished their 2018 seasons in Premiership glory, with both contributing immensely for West Preston Lakeside as they defeated Macleod in the Northern Football League Grand Final on

Kovacevic’s sterling performance in the Ruck where convincingly won the ruck & gave his midfielders first use of the ball all day saw him take out the medal for Best on Ground. It completed a remarkable comeback for Kovacevic, who ruptured his ACL at the exact same ground only 15 months earlier.

Tilley, who has thrived playing on the wing in the second half of the season with the Roosters, also played his part, being named amongst the Roosters Best & kicking a crucial goal late in the game.

There were also quite a number of past Coburg players who took the field for West Preston in yesterday’s decider, consisting of Ahmed Saad, Michael Ercolano, Adam Valeri, Garrett McDonagh, Jackson Clarke, & Luke Lirosi. Ozgur Uysal was also a prominent contributor throughout the season for the Roosters, however unfortunately was a late withdrawal due to injury & therefore unable to injury.

Congratulations again to Mark & Aidan, as well as all involved with the West Preston-Lakeside Football Club.