100 YEARS OLD AND STILL ROARING FOR THE LIONS

Growing up three doors down from Coburg Football Club, Florence (Flo) Howlett is currently the clubs oldest living member at the extraordinary age of 100 (she turned 100 on September 15th 2018).

The pre-season membership drive saw the club reach over the goal of 1000 members for the 2019 season, with people from all walks of life signing up to support the stand-alone club. If you take the time to Look at the Life Members board in the social club, Mrs Flo Howlett was inducted as a life member in 1985 and said she has only ever been a Coburg supporter.

Flo was the youngest of ten children and moved to Australia when she was three years old from Nottingham, England. She has been based around Coburg and Brunswick her whole life and currently resides in Pascoe Vale. 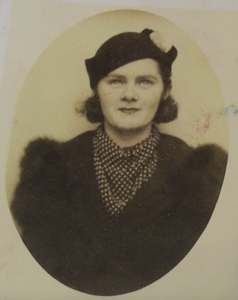 Living three doors down from the ground (where the carpark currently is), as a kid, Flo would watch the team train by peaking over the fence, “making sure they were training properly,” and would attend the majority of home games.

As she got older, she continued to attend matches and started helping other ladies on the ladies committee, raising money by serving afternoon tea to the public on game day.

“We did the afternoon tea, and if there were a dinner on, we’d do that and do all the cooking for that. After so many years, the ladies who had started and were part of the cooking shifted. Another lady Margaret, her mum, a couple of other ladies and I started making things Wednesday afternoons to sell and make a few dollars for the club.”

A highlight for Flo on the committee was when former Prime Minister Bob Hawke visited the club. “We had a lovely lunch when Bob Hawke came, and I’ve got my photo taken with Bob Hawke. I don’t know if he was very interested or not, but he used to come when something special was on with his wife”. 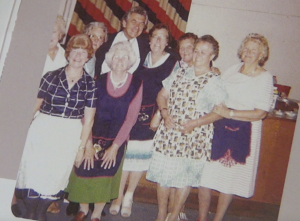 Flo met her late husband, John (Jack) Howlett (who was a Golden Lion at the Football Club) at a dance in the Coburg Town Hall. “They had a Golden Lions supporters club. They were a club of supporters who went in the rooms and had a few beers and came out and barracked for them. They paid so much a year to be in it, but he was in it for quite a few years.” 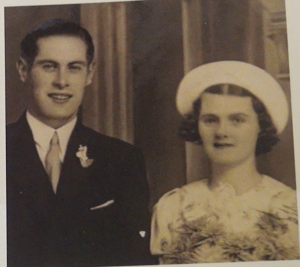 “The best games I ever saw though was when we won the premierships, that was great,” she said.

Taking time to remember who her all-time favourite Lions were, Flow said Harry Equid who came from Essendon was a standout. “when Harry got the ball, we used to say put it on the carpet Harry, he used to like to put the ball on the ground and kick it, but there’s none of that now of course. Ray Jordon was also a good rover, Dave Starbuck he was a ruckman, Robert Wilkinson we used to call ‘Patchy’, and there was also Keithy Fewkes.”

Although Flo finds it hard to keep up with the club these days, not knowing the players personally, she is well aware of who Sam Lowson and Leigh Adams are. “I was just reading about Sam Lowson doing well in the paper and the back of the leader this week there was a nice big piece about the coach Leigh Adams as well.”

Flo watched the Lions win against Frankston in round three which was broadcasted live on channel seven at Piranha Park and said she was proud of the team win.

Her family members still follow Coburg Football Club and keep her up to date. “My son Chris was going to see Box Hill and Coburg last week. I haven’t seen him since so I don’t know what he thought, but I think against Box Hill it’s hard because they have Hawthorn behind them, so I think the players did a pretty good job.”

A popular and lively resident at her age care home, Flo spends some of her time doing exercises, reading, group activities, and selling scarfs she knits to other residents.  She also visits fellow life member and former Coburg Football Club player and coach, Clarrie Butcher, who lives within the same aged care as her. Clarrie came to the club in 1961 and was Captain of the VFA reserves team, a member of the committee, the junior development officer, and an overall great club man. 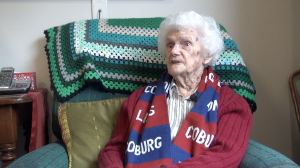 Presented with her new Coburg Football Club scarf and, “red roses for Coburg”, Flo said she never volunteered for recognition.

“You do this for pleasure when you’re in a club, and you’re working for them, you do it for pleasure, I’d always look forward to the footy.”

“They (the club) didn’t ask us to do it (raise money) we made it up ourselves, we didn’t make much money in it, but it got other women interested in the club, and every little bit helps.

Flow says she still has a voice to barrack hard. When asked if we can expect to see her down at the Lion den sometime soon she said, “If my son is going to a match and I feel like it then I’ll let him take me, I must try to get up to see them play.”

There is no doubt Flo is red and blue through and through. Speaking about the remainder of the season ahead she had one message for the current playing group. 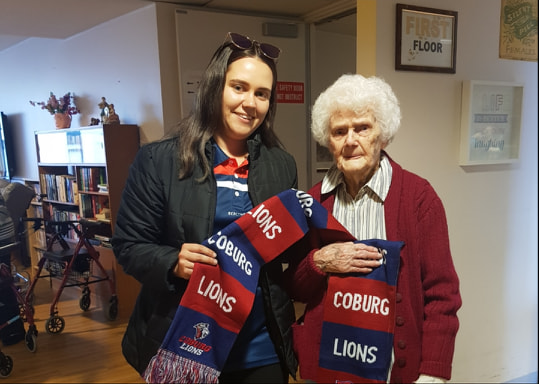 Lions to pay tribute to success of the past