Another Cannon graduate makes his way to Piranha Park! 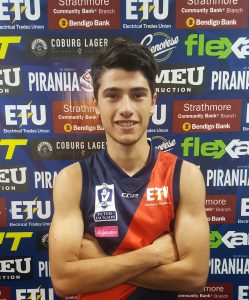 Billy Cannolo is the latest youngster from Calder Cannon to make the step up to the VFL with Coburg.

Cannolo managed eight games at TAC Cup level in 2016 with the Highgate Reserve based outfit. Amongst his better performances came in the big win over the Eastern Rangers with 27 possessions, and also managed 2 goals from 16 disposals in an early season win over the Gippsland Power.

Although he finished his 2016 with Riddell District League side Rupertswood, Cannolo still managed to play good senior football at local level- he managed four goals in the last regular game of the season (having already played under 18’s earlier in the day), and would be named Rupertswood’s best on ground in their only final. Eligible for the under 18’s, he played a crucial role in their finals campaign- named amongst their best in the first final and four goals in the Grand Final winning side.

Cannolo is best suited to a role as an outside midfielder, and is also capable of playing as a small forward. Despite his light frame, Cannolo’s toughness was highlighted with his performances in the TAC Cup, where he would be amongst Calder’s leading tacklers amongst his eight games, with his season high being nine in one game.

While he is the sixth Calder 2016 graduate to make his way from the factory to the den for 2017, he cannot wait to have his chance at VFL level.

“I think just giving myself a new challenge and setting myself with new goals, perhaps going from playing good development footy, to hopefully later down the track potentially pushing down a berth in the ones, that I see as some new challenges,” said Cannolo

List & Recruiting Manager Sebastian Spagnuolo was delighted with adding another former Cannon Graduate to its list for season 2017, following two months’ worth of preseason training.

“Billy is a good prospect for the future for our footy club.”

“He’s got a willing attitude when it comes to learning and he will no doubt use his first year in the VFL system as a developmental year which should see him grow physically and also learn a heap in our on and off field development programs,” Spagnuolo said.

With the list on the home straight of being finalized for 2017, we will announce a few more to join the club in the next coming days.