Coburg looks to make it 2 for 2 against Frankston

After a tough loss to Casey round 12, we hope to bounce back and score our second win of the season against Frankston on Sunday at SkyBus Stadium.

This week the Lions welcome Josh Weightman back into the side after a week on the sidelines with injury.

Luke Bunker continued his strong 2019 and claimed ‘Lion of the Round’ honours for his 33 disposal, nine tackle performance against Casey, earning himself a spot in the VFL team of the week.

Jesse Corigliano made an impressive return from injury against the Demons, with 26 touches from the backline in round 12.

Co-captain Pete McEvoy and Steven Stroobants led the charge up forward last week, booting three goals each and they will be joined by Weightman, Hedley Smith, Mitch Podhajski and Jackson McDonald in Frankston.

Bunker will be joined by Lochlan Dickson and Marcus Lentini in the middle with Swierzbiolek starting in the ruck and Josh Guthrie and Jack Murphy rounding out the midfield group.

Lentini continued his strong month of footy with a 40 disposal effort against the Tigers backing up 32 and 43 disposal efforts in the previous two weeks.

Frankston currently sit at the bottom of the VFL ladder, also with one win so far in 2019, coming in round 11 against North Melbourne, but our players will be taking nothing for granted and are ready for a hard fought battle.

The Last time the two sides met, the Lions defeated Frankston at home in round three of the 2019 season by 75 points, led by co-captain Pete McEvoy, who kicked six goals in his 50thmatch.

Other strong performers on that day were Lentini (33 disposals) and Podhajski (26 disposals, six tackles) while currently injured Lion Sam Lowson booted three and Stroobants booted two along with another injured Lion Billy Cannolo.

We hope to see a large contingent of Lions fans at SkyBus stadium on Sunday at 2pm as we look to get our second win of 2019 on the board.

All Lions fans please help drown out the noise of the passionate Dolphins fans and get down to support our Lions! 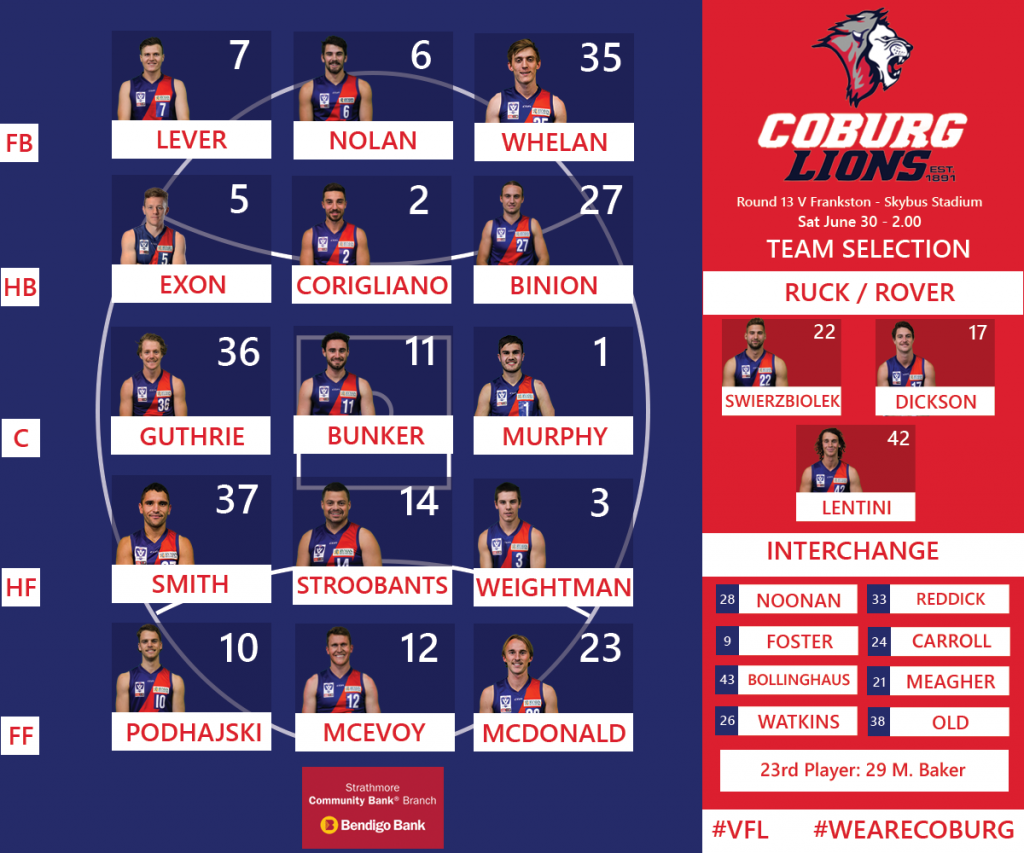