COBURG coach Peter German is adamant star defender Michael Hartley is ready for another crack at the top level. 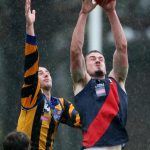 r Collingwood rookie is in the frame for selection at tomorrow’s AFL National Draft, having produced another stellar VFL season. Still only 22 years old, Hartley played all 18 games for the Lions this year and was named in the side’s best on nine occasions.

German said the 198cm big man had clearly improved his game since also attracting interest ahead of last year’s draft.

“He can only do what he does and I think he’s had a better season this year,” German said.

“He’s grown as a person and his maturity as a footballer has improved, which has seen him make better decisions.

“He’s learnt a lot more again about himself and his game and what he needs to do. He can’t do any more.

“He tested better this year in the combine than he did last year, so he’s improved in a lot of areas. I’d be disappointed if there wasn’t a club that was interested. There has been a lot of interest, but how often have we heard that?”

He spent two years on Collingwood’s rookie list after being taken at pick 87 in the 2011 Rookie Draft but a spate of injuries limited him to five VFL matches in two years for the Magpies before he was delisted in 2013.

Coburg teammate Ozgur Uysal has also attracted interest ahead of the draft. The 23-year-old midfielder averaged 25 disposals across 18 games for the Lions in 2015.

Michael Hartley off to Essendon!