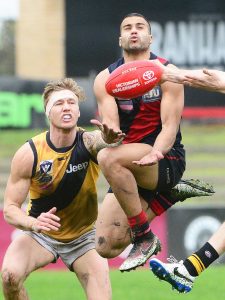 Ahmed Saad takes a mark while playing for Coburg in the VFL earlier this season. Picture: Carmelo Bazzano

Written by the Moreland Leaders Chris Cavanagh, published on the 21st of June 2016.

FORMER St Kilda forward Ahmed Saad believes he still has plenty to offer at the top level as he enjoys an impressive season in the VFL.

The 26-year-old sits atop of the VFL goalkicking table with 24 majors to his name from eight matches for Coburg, two goals clear of Williamstown’s Sam Dunell.

He booted 6.1 from 15 disposals against North Ballarat in Round 10 last weekend in his second game back after missing three matches because of a minor hamstring tear.

Two goals came from limited opportunities in a 31-point loss to Port Melbourne on Saturday.

Saad was delisted at the end of last season by the Saints, who had redrafted him as a rookie for 2015 after he served an 18-month ban for testing positive to a banned substance contained in an energy drink he consumed in 2013.

He managed just four AFL matches last season, spending much of the year with VFL outfit Sandringham where he kicked 33 goals from 17 matches.

“I came back as a rookie but just had limited opportunities at the Saints last year and I think that’s what cost me a little bit, that another club couldn’t see that I’ve got what it takes to play AFL footy,” Saad said.

“I definitely think that I’m capable of playing at that level still.” 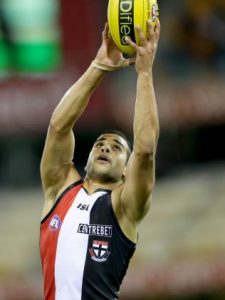 The 178cm small forward put his hand up to become an Essendon top-up player in 2016, but was ultimately overlooked.

He said he had considered turning to local football this year but made a late decision to play in the VFL in a bid to return to the AFL ranks in 2017.

“When I first got delisted I thought, ‘I’m done, it’s been a long couple of years’ and I thought I might just go play local with my mates and enjoy it,” Saad said.

“But I think towards the start of pre-season and that I thought to myself in 10 years’ time I might regret the decision of not giving it one more go and playing VFL for another year and I just wanted to make sure that I didn’t have any regrets in the future.

“So whatever happens now, at least I’m satisfied and content with myself and with the decision that I’ve made.”