Harry Nolan has gone from strength to strength in his time at Coburg and it hasn’t gone unnoticed, with AFL clubs keeping a close eye on the key defender. Jarrad Gardner sat down with him ahead of next week’s AFL draft to discuss his time at the club and how he can contribute to an AFL club should he be drafted.


Jarrad Gardner: You’ve been through this process before, being invited to the state combine in 2017, does that prepare you better for the week ahead and what to expect?

Harry Nolan: “Yeah, doing it all through TAC Cup sort of helped me know what it’s about and what to expect and I think I’ve also been able to help Sam Lowson a little bit as well because he’s gone through it for the first time but for me it’s nothing to major because I’ve been through it before.” 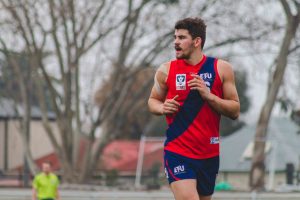 JG: Going back to the start of your Coburg career and once you broke into the senior team, did you expect to stay in the side consistently and play the footy have over the past two years?

HN: Nah I didn’t expect to play every game since I debuted, I sort of thought it’d take me a bit of time to break in as one of the key pillars because as a key defender you can take longer to develop your body and get some real size so I was sort of expecting to get a few games here and there but I feel like I’ve filled out and cracked in now.”

JG: Was it an easy decision to pick Coburg coming out of TAC Cup? What were your reasons for coming to the club?

HN: Coming out of Eastern Ranges, they had a link with Box Hill and they were keen to get me down but Coburg being standalone was ideal for me because I thought without development league I’d really struggle to get a game at Box Hill and I’d be playing local footy most weeks, whereas I’d have more chance at Coburg.

It’s a different culture at a standalone club I feel, we’ve built a strong mate ship because everyone is with each other all week, it’s not half the team is AFL-listed and the other half are VFL. So that was another key factor. I love it here and I am happy to have re-committed for 2020 already.

JG: You were spoken about as a contender for the Fothergill-Round-Mitchell medal in 2019, did that feel like good recognition after a strong 2019 season?

HN: “Yeah, obviously being a contender for any award is a massive achievement, I was just stoked to be getting recognised for what I was doing and how well I was playing.”

JG: How would you describe the way you play your footy?

HN: “I play a very competitive, a little bit aggressive sort of way, nothing dirty but if it comes to push and shove I’m happy to give as good as I get. I like to annoy my forward and try to get them angry and make them break and put them off their game.

I don’t want to be beaten and I think that shows on game day, I put in a lot of effort.” 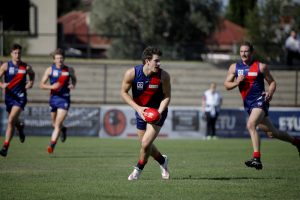 JG: Has playing against AFL-listed forwards given you the confidence that you can take the leap to AFL level if you are drafted?

HN: “Yeah definitely, it’s good to sort of get that practice if you want to make the next level to play against these fully grown men that have been in the system that long, like playing on Ben Reid, he got the better of me a few times but you learn a heap playing on guys like that and you gain a little bit of confidence if you can beat them.”

JG: You played a little bit as a forward in your junior years, is that something you’d ever like to revisit or are you happy in defence?

HN: “I’m happy in defence, but if my coach wants me up forward I reckon I’d be confident enough to be able to help out. I prefer playing back but will definitely go forward if that’s what the coach needs.”