After falling just short in round 16, the Lions are hoping to bounce back against Port Melbourne on Saturday afternoon at ADCON Stadium and could be buoyed by big the inclusion of Sam Lowson following the successful rehab of his ankle injury.

Lowson joins the extended bench, and if named will play his first match since round eight against Geelong, which is sure to spur on his side.

Former Calder Cannon Tye Browning will once again be the 23rdman this week after an impressive debut, with 12 disposals and a goal against North Melbourne.

Mitch Podhajski claimed Lion of the Round honours in round 16, with a strong performance up forward, kicking four goals to go along with his 19 disposals.  “Pods” was also instrumental across the backline in a day which saw him excel at both ends of the ground.

Steven Stroobants and Mo Saad booted two goals apiece as well in the loss and they will be joined by Peter McEvoy, Kane Noonan and Josh Weightman in the forward 50 against Port Melbourne.

The back six remains unchanged once again, as co-captain Ryan Exon is joined by Tyson Lever, Jesse Corigliano, Harry Nolan, Liam Whelan and Josh Guthrie in the defensive 50.

Our midfielders again stood up against quality opposition in round 16, Luke Bunker continued his impressive 2019 season with 20 disposals, 14 tackles and a goal while Lochie Dickson (30 disposals, 1 goal) and Marcus Lentini (29 disposals) also continued their strong form.

19 year old Mark Baker has been named to start in the ruck while Jack Murphy and Jackson McDonald start on the wings.

Port Melbourne currently sit seventh on the VFL ladder, with seven wins and a draw so far in 2019. In round 16 they were defeated by Werribee to the tune of 27-points.

This is the second time we will face the Borough in 2019, going by down by six-points in our round five encounter which saw us play exhilarating football, getting out to a 37 point halftime lead.

This weekend sees the Lions take on the Borough for the 168thtime with the Lions’record sitting at 67 wins, 96 losses and 4 draws, can we make it 68 wins against our standalone rivals?

We hope to see some travelling Lions fans at ADCON Stadium at 2pm on Saturday afternoon cheering on the boys. 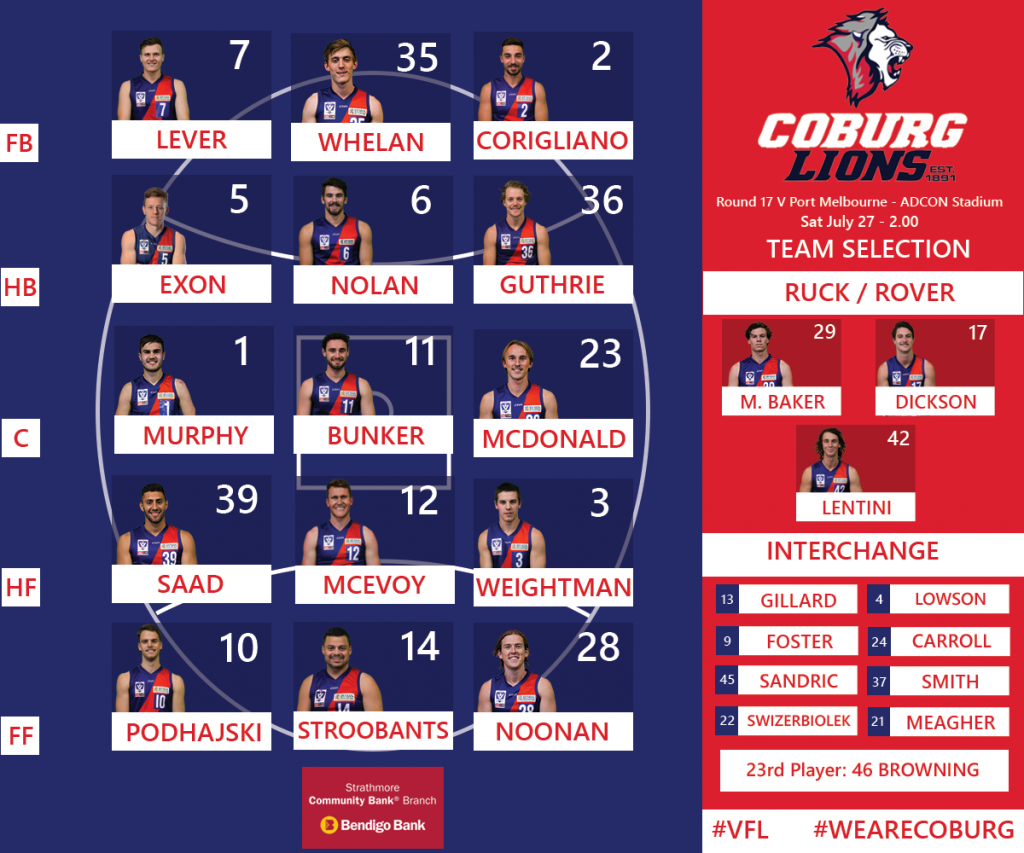