After a disappointing loss at the hands of ladder leaders Richmond in round 11, the Lions will be hoping to bounce back against the Casey Demons on Sunday at Piranha Park.

We welcome Vice-Captain Jesse Corigliano back to the side after a week on the sidelines with lower leg injuries sustained against Northern Blues in round 10.

Tyson Lever looks to continue his strong run of form in recent weeks, after claiming ‘Lion of the Round’ honours for his 30 disposal, seven mark and nine rebound 50 performance against Richmond.

The side was buoyed by the return of co-captains Pete McEvoy and Ryan Exon against Richmond with both players having an impact on the contest.

McEvoy booted two goals in a tough day for our forwards while 23rdman Mark Baker also booted one on his VFL debut, meanwhile Hedley Smith was unable to replicate his debut performance, however looked dangerous at times against Richmond and will look to bounce back this week in his first game at Piranha Park.

Steven Stroobants, Kane Noonan, Sam Binion and Liam Whelan round out the forwards group to take on the Demons.

Exon was named among the best players by the coaching group as he, along with Lever will be aided by Corigliano’s return to defence, while Josh Guthrie, Harry Nolan and Lachlan Watkins will also line up down back

Lentini will be joined by Luke Bunker in the middle who amassed 29 disposals to go along with seven tackles and a goal against Richmond last week.

Lochlan Dickson, Josh Weightman and Jack Murphy will also start in midfield while Floyd Bollinghaus will start in the ruck where he has impressed as a backup option in his first three VFL matches, most recently recording 15 hit outs against Richmond.

Casey currently sit 11thon the VFL ladder however cannot be taken lightly, they will be well rested coming off a bye in round 11 after recording a strong 63-point victory over Collingwood in round 10.

We have not defeated the Demons since 2014, however three of the seven matchups were decided by three goals or less.

In our most recent encounter in round 12 of the 2018 season, the Demons were too strong, running away 77 point victors led by seven goals from Sam Weideman

We encourage all Coburg Football Club members to get behind the Lions at Piranha Park, from 12:30 pm on Sunday. 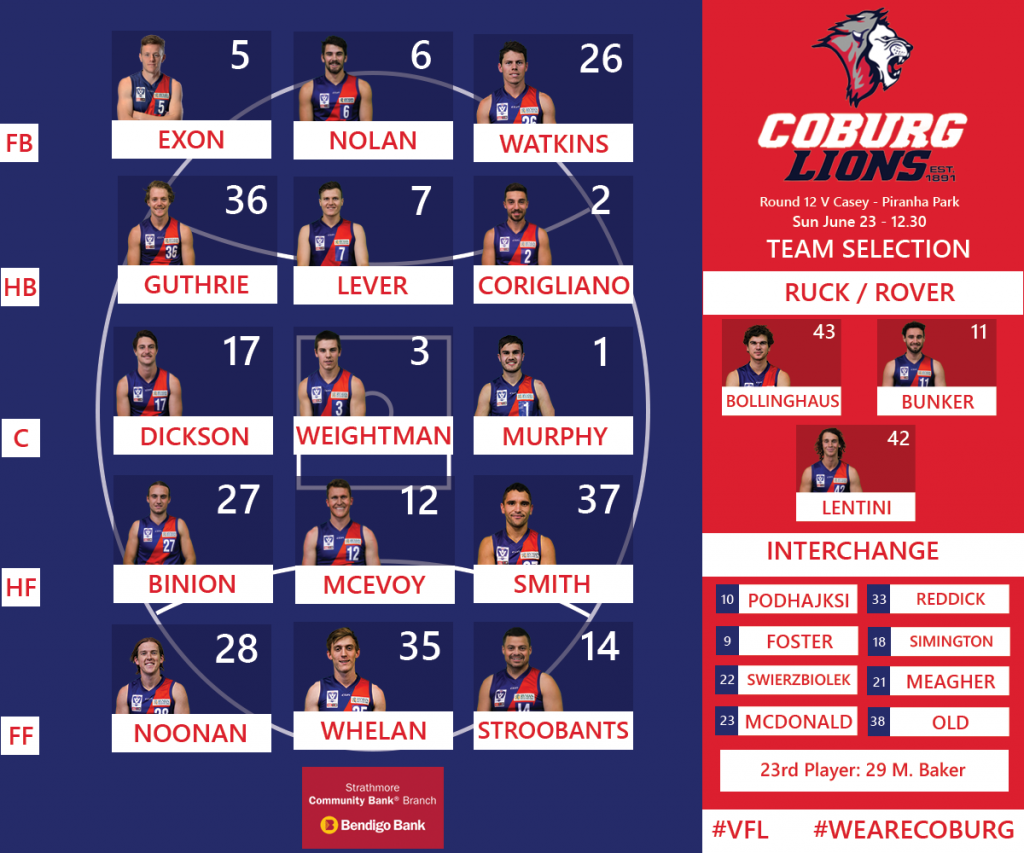 Club Statement re: this weekend’s game vs Casey Demons