Born from Aboriginal origins, Hedley Smith was raised in Perth, Western Australia in the town of Kendenup.

His mother belongs to the “Menang” tribe (in the south-west of Western Australia) whilst his father was a part of the “Balardong” people which inhabited the lands east of Perth in but was born in Katanning.

Football has always been a part of Hedley Smith’s life right from a young age as he would spend a lot of time with his cousins playing in the park.

‘I’ve been into football ever since I can remember. Ever since I started walking I’ve had a football, I still have photos with a “footy” from when I was little and it has been something I have done throughout my whole life since playing junior football,’ Smith said.

‘I started playing at Kendenup but they only had an Under 10s team. I then went to Thornlie where I played from all the way from Under 9s through to the Under 17s.’ 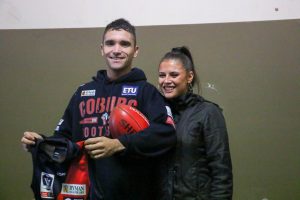 ‘I stayed at Thornlie and took up school football (at Trinity College) in Year 8 and played that til year 12, playing both Saturday and Sunday as well as training three times a week.

Hedley made the decision to move to Melbourne in August 2017 with his girlfriend Mia in search of a fresh start.

‘We decided to come over from Perth, we were sitting in the park one day, we were on the phone to her mum and she said “why don’t you guys go away” and we said “alright then”,’ Smith said.

‘We booked the flights the next day and were on the plane straight to Melbourne.’

‘We thought about Adelaide or Sydney but Melbourne was just at the right time and place.’

‘I think it was a move for the better and it is the capital state for football. It’s where football is all happening as well as being the best city to move to.’

Moving to a new state can be a daunting proposition, more so when you are young but with Smith having relatives in Melbourne made the transition that much easier.

‘When I first came to Melbourne, I made to decision to go back to football,’ Smith said. 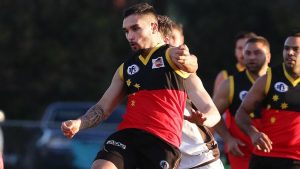 ‘My cousin was also in Melbourne at the time and he was playing at the Fitzroy Stars in the Northern Football League so he got me to come down.’

‘I thought Fitzroy was a good fit, it was closer and there were a lot of indigenous boys so I thought I’d fit in a bit more and be a bit more comfortable.’

Smith tried out for the Coburg Football Club in the 2018 preseason but was ultimately not offered a position on the main list despite his efforts. Not one to shy away from the challenges ahead Smith knuckled down and put together a dominant season for Stars being named in the bests on nine occasions to eventually finish fourth in the Clubs best and fairest.

‘As soon as I arrived in Melbourne it was my goal, I just wanted to see how far I could go,’ Smith said.

‘It is all a part of the big goal, most of us boys here want to play in the AFL and this was the next step.’

‘I asked Simon (Minton Connell) who was the president at the Stars, if he could put in a word for me at Coburg as he knew Seb.’ 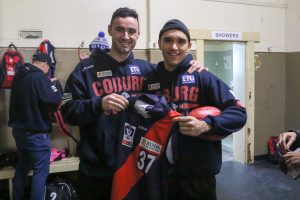 His hard work paid off a year later as he impressed during the preseason to secure a position at Coburg.

After promising form for the Fitzroy Stars, Smith was given the news last Thursday after training that he had been selected to play that weekend against the Northern Blues in the “Battle of Bell Street” and he did not disappoint. Smith made the most of his opportunity as he gathered 18 disposals, laid five tackles, kicked five goals as well as having a hand in three others in his Coburg debut.

‘It was the best phone call I’ve got this year, it was awesome, I think that you sort of feel it (the debut) coming, that you’re doing everything right in the weeks building up to it, the games and the training sessions,’ Smith said.

‘It makes me feel awesome, that everything I’m putting my time and effort into is paying off,             it makes you feel like you’re on the right track. I couldn’t ask for a better start.’ 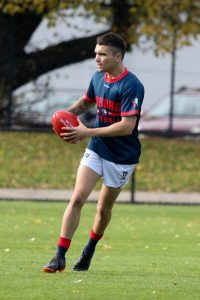 ‘During the game I wasn’t too worried about how many touches or goals I had, it was all about staying focused on what I had to do for the team.’

‘Unfortunately we couldn’t get the win but on a personal level it takes a lot of weight off the shoulders and gives me a better feeling going into training knowing I can perform.’

Smith’s indigenous culture is a huge part of his life and one he has embraced to the fullest extent. In combination with football he feels that he has the perfect balance.

‘My culture is very important to me, for me there is so much to it. Being Aboriginal and playing football, I think there are lots of things you can offer using football.’

‘It is a good way to show yourself as a leader and show other indigenous people the right way.’

‘It can change your life for the better.’

To further strengthen the ties between indigenous cultures and football, the Coburg Football Club will unveil its NAIDOC (National Aborigines and Islander Day Observance Committee) guernsey  in the coming weeks for a third consecutive year.

Smith who earlier last month modelled the guernsey was proud to be a part of the initiative.

‘I love that we as a club celebrate NAIDOC Week’ he said. 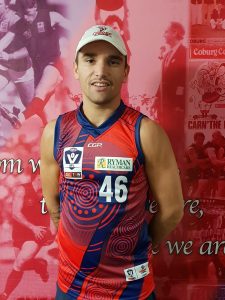 ‘I think it’s a great club, they are open to anybody and getting involved in all the ways they can, whether that’s through Family Day, fundraising or other things.’

Coburg is currently the only VFL club to commemorate NAIDOC week.  The guernsey will be worn against Essendon on July 7that Piranha Park.

Outside of football Smith works with First Traffic, a company located in Melbourne’s north-east suburbs.

‘Currently I am looking for a full time job but I’m doing a bit of everything at the moment,’ Smith said.

‘I was with a company called Industry Work Force (IWF) doing factory stuff; they sent me around all around Springvale. That was alright as I got to meet new people and went to different places each day.’

‘I started that job two years ago when I first arrived in Melbourne, it was my first job and then I went onto the sky rail in construction for seven months before going back to IWF.’

‘Now I’ve signed up with Peter O’Brien at First Traffic which is based in the city working in traffic control.’ 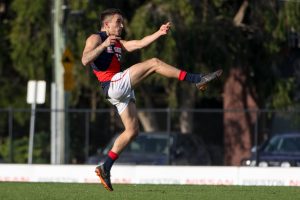 Post football Smith is unsure what lies ahead but he hopes to work on creating indigenous programs and football pathways for his people as well as take up studying.

‘I am still in that process of figuring out what I want to do after football but I have thought about it,’ he said.

‘The direction I want to go with after football is to be helping our people and finding different ways to do so. I think I might also study something, maybe law or criminology.’

When you think of current indigenous footballers and who people tend to look up to, generally the pair of Eddie Betts and Lance Franklin come to the forefront of the mind but that isn’t the case for Hedley Smith who prefers the low key approach.

‘There are a couple of boys in the AFL I look up to, Tim Kelly and Matthew Parker. Both of their stories inspire me,’ Smith said.

As well as having football icons Smith also has different role models in his life like former professional boxer Floyd Mayweather. 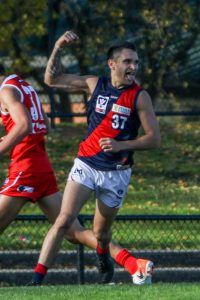 ‘I like Floyd Mayweather especially the way he went about his sport and his life, I try to watch his videos as much as I can. He is awesome.’ Smith said.

A reserved man, Smith describes himself as a fun going person but one who is quite determined on what he wants to achieve and where he wants to go.

‘I like to say that I’m a happy man, I think I’m at the time in my life where I have to get things done,’ he said.

‘It’s like I’m on a mission and am always looking to move forward. I can get along and talk with anybody.’

Now 23 and with the world at his feet, Smith has come a fair way from the boy in the park to the man on a VFL list but the journey is only just beginning.

‘I think I’ve done everything I could, I hope there is a lot more to come and I think there is.’

Tigers prove too tough a test for Lions