LIONS SET EYES ON THE TIGERS

It’s time to take on the Tigers in the toughest test to date, with a new Lion to join the pride.

This Saturday we head to Holm Park in Beaconsfield to play Richmond, where Coburg’s 17th debutant of the 2019 VFL season will make his ‘Mark’.

Mark Baker will receive his Coburg guernsey from leadership members after making a significant contribution in the forward line and ruck for Macleod in recent weeks. Recruited from the Northern Knights in the NAB League where he managed seven games in 2018 as an overage player, Mark also represented VIC Metro last year. This week he has been named as our 23rd man.

‘The Battle of Bell Street’ last week was everything it promised to be between the two old town rivals Coburg and The Northern Blues. After four quarters of competitive and exciting footy from both sides, Coburg left their chase too late and were defeated by 17 points.

It was no shock that the ‘Lion Of The Week’ against the Blues went to ‘Deadly Hedley’ ( Hedley Smith) for his outstanding performance on debut. He ran with the opportunity to play at the next level, adding a new spark in the forward line since Coburg have lost Sam Lowson and Billy Cannolo in recent weeks to injury. Kicking five goals in his VFL debut and making the VFL team of the week, all eyes will be on Hedley in our forward 50.

Marcus Lentini finished with a game-high 43 disposals, and 24 of his touches were before half time. Nominated for the ‘VFL Totally Workwear Best Player of the Week’, he has already racked up 251 disposals for the season and will no doubt press a major midfield threat to Richmond.

Our Co-Captains Ryan Exon will lead the back six on return from his one-week suspension. Tyson Lever stood up in defence when it mattered in ‘The Battle of Bell Street’ and when Harry Nolan, Josh Guthrie, Lachlan Watkins, and Jackson McDonald join him on Saturday, they will severely restrict the Tiger impact. Unfortunately though, Jesse Corigliano will be missing following the injury he sustained in the first quarter last week.

Co-Captain Pete McEvoy and Ben Reddick will both return from a week on the sidelines with injury, while it is still uncertain how long Vice Captain Jesse Corigliano will miss after suffering a match-ending knee injury in the first quarter last Sunday.

Ladder leaders Richmond have shown they are a force to be reckoned with and this weekend is an opportunity for Coburg to match that. The Tigers have won four of their last five matches, and although they are not at Punt Road this week, they still have the home ground advantage. When the two rivals met in 2018, Richmond went home with the win 18.13.121 to Coburg’s 10.5.65.

Last week the Tigers finished with a match-winning seven-goal final term against Geelong to win by 23-points. Mabior Chol highlighted his capability as a dual position player with 22 hit outs and contributions in the forward half. Shai Bolton, Nathan Broad, Maverick Weller, and Luke Nelson have all been the talk of Tigerland in recent weeks and crucial to the Tigers success. Coburg will need to rise to the challenge and capitalise on every opportunity throughout all four quarters.

It will also be the SOCKIT2MND round across local leagues and the VFL in Victoria in the fight against MND. Players will be wearing the ‘Fight MND’ socks to support Neale Daniher and all sufferers of MND.

We encourage all Coburg Football Club members to get behind the Lions at Holm Park in Beaconsfield, from 11 am Saturday. 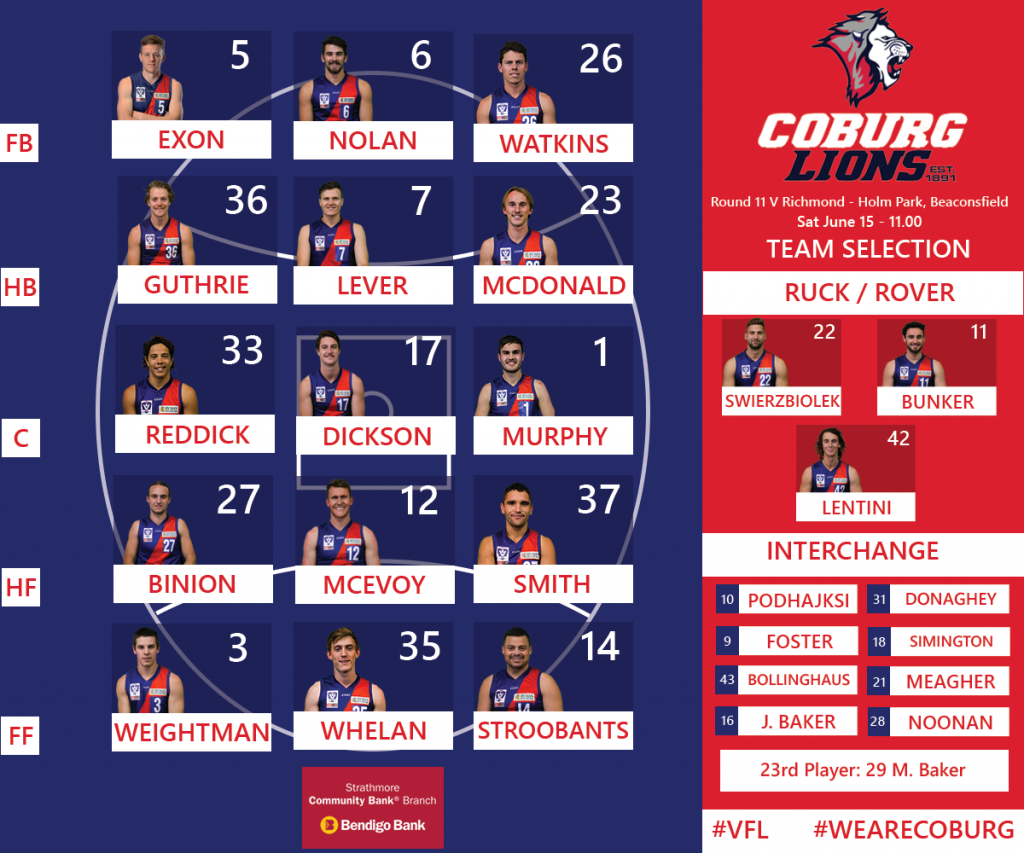