Several Lions continued to strive for VFL selection over the weekend just gone.

Luke Di Lizio played an important role for St.Bernards by kicking a goal and being named among their best as they got up at home over second placed University Blues, keeping its finals hopes alive.

Jonty Neaves, Jay O’Donoghue andJack Sandric again all appeared for Glenroy. While O’Donoghue and Sandric both managed to hit the scoreboard for the Roy’s it was a dirty day all round for them, as they lost to reigning premiers Aberfeldie by 95 points at Sewell Reserve.

Tye Browning’s Cragieburn had the bye in Division One.

West Preston Lakeside continued its climb out of the relegation zone with a 19-point win over Hurstbridge at the Ben Frilay Oval. Aidan Tilley featured and contributed well.

Mo Saad, Harry Simington and Jack Baker all made an appearance for MacLeod, as they notched up a 73-point win over Northcote Park at De Winton Reserve. Simington was an early casualty and suffered a concussion aswell as receiving stitches for a split chin, which will be assessed by Coburg’s medical team this week.

Tom Meagher was again named in the best for Upper Ferntree Gully, but it wasn’t enough as Park Orchards came from behind to win by 3 points at Kings Park.

Will Donaghey played for Wodonga Raiders in a 41-point loss at home to Wangaratta Magpies.

Stay tuned for Thursday Nights team selection as we take on Frankston at Skybus Stadium this Sunday at 2pm. 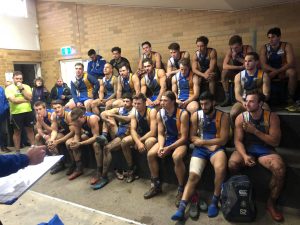