Overcoming adversity to flying under the radar

Overcoming adversity to flying under the radar 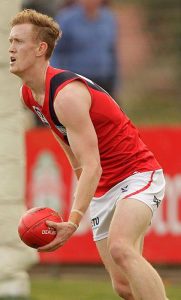 And while there have been many players over the past two seasons who have graduated from the TAC Cup, made the transition from senior local footy, or have come from clubs where they were stuck playing development league, it has seen some emerge as draft prospects.

While the likes of Robbie Fox, Lachie Johns and Ben Allan emerging on the radar on a few AFL recruiters, one throughout the 2016 season has gone flying under the radar.

And it comes in the form of former Northern Knight Liam Hunt.

A Northern Suburbs local who managed his junior football with St.Mary’s Greensborough and later Eltham, Hunt arrived at Piranha Park for the 2015 season having spent three seasons at Preston City Oval in the TAC Cup, the last season as a under 19 year old where he also spent some considerable time with the Northern Blues.

However, while he harboured AFL ambitions, and despite already become immersed in the Northern Blues system, he decided to make the decision and start afresh, and headed along the west side of Bell Street to begin his VFL career.

“The decision was pretty easy knowing Coburg is a non-aligned VFL club, knowing I was going to get opportunities at senior level and it also helped when a few Northern Knights boys were heading that way as well.”

Impressing throughout the Lions pre-season campaign heading into the 2015 season, Hunt managed enough to be given opportunities in the seniors for the practice matches, and subsequently earned himself a round one debut against Richmond.

And while he was certainly impressive in his first four games where he was averaging 23 disposals, it was the round six game against eventual premiers Williamstown where he suffered a medial ligament strain in his knee, and the wheels on his 2015 season had virtually fallen off.

“Last year was quite a frustrating one for me, getting injured in Round 6 after playing some pretty good footy, to struggle to get back in the side when I was fit again was disappointing.”

Hunt would return in the Development League for the round 14 clash against Sandringham. He would play every remaining game for the season in that competition, minus the last round, where he managed to be amongst the Lions’ best in the loss to North Ballarat. He would appear in both Development League finals.

And while his first season of state league football didn’t exactly go to plan, it inspired him to work harder towards his second season at the club in the preseason. “I learnt a lot about my game and my body which is why I haven’t missed a beat so far this season.”

And for the second consecutive season running, Hunt was once again named for round one against North Ballarat. Despite a slow start to the year by his own standards, it all changed in round six, virtually 12 months after that crippling knee injury suffered in the corresponding round last year.

With Coburg unluckily sitting at an unexpected 0-5 to start the season, the season was kick started on the back of an unlikely win over north-western standalone AFL rivals Essendon. Not only that was the case for the senior side itself, but for Hunt, who managed 26 possessions (13 of them contested), was the winner of the Best on Ground Medal in the Strathmore Bank Community Cup clash.

“Round 6 was the game that sort of kicked started my season in a way, probably my best game I’ve played for the club. Was still a bit surprising getting my named called out though. My first half of the season has been a bit up and down with form but it's been pleasing to string together a few good games recently.”

And while he continues to gather the ball which he has continually done in recent weeks, he has credited a few with his improved form throughout the 2016 season, as well as the previous season.

“Craig (Lees) and Germo have always had faith in me which I thank them very much. Germo has given me plenty of opportunities to play different roles on game day, as a defender, outside wing man and now filling a space in the midfield which I hope to hold that position. He too has obviously helped me get to another level this season, and have learnt a lot off Ricky Pettard as midfield coach, while Nathan Thomas as my mentor has been very supportive also.”

And while he still harbours AFL ambitions which is still his goal, he admits he can only do so much himself. “My goal is still to hopefully to one day play at the highest level. I can only train hard, do what I can off field and perform on game day, and the rest is up to them.

As a Collingwood supporter, Hunt also idolises and bases his game on two club stalwarts, one current and one past player each- Dayne Beams and Scott Pendlebury.

“I'm a Collingwood supporter so for a while I modeled my game on Dayne Beams but he's now gone to Brisbane. Also love watching Scott Pendelbury go about his stuff.

However, during his time in the VFL, externally he has been grateful for the support from his family and friends within the club.

“I have been very lucky with how much support I’ve had from my grandparents, uncles and aunties but my dad coached me a lot as a junior and pushed me hard to be the best which I'm very thankful for, and mum have also given me a lot of support on and off the field. I also now have many close mates at the club. Jake Kalanj and Keenan Posar would have to be my closest due to playing my junior footy with them.”

However, for the past three seasons, one family member has been making his mark in the big league, his cousin in Western Bulldogs star, Marcus Bontempelli.

“Marcus and I have pretty much done everything together growing up, whether it was junior footy, school commitments or family outings we have spent a lot of time together. He's now teaching me how professional you have to be to perform at the highest level, and I hope I can join him in the AFL one day.”

Midfield Coach Ricky Petterd was pleased with the way Hunt had progressed from the beginning of the pre-season campaign to the business end of the season. “Liam firstly turned around his training habits, preseason he trained a little bit casually with not much intent, but now he trains with high intensity and does stuff with a lot of conviction and I think that has transferred to the game he is playing at the moment. He’s got some serious inside contested ball skills and a great footy brain, he’s a player that finds time which is a great trait and this last part of the year is really important for him to continue that form.”

And with six games of the year remaining, Hunt will undoubtedly be a crucial component as the Lions look towards what potentially looks to be an eventful finish to the 2016 campaign.

Team Announcement: Round 14 vs Sandringham Zebras