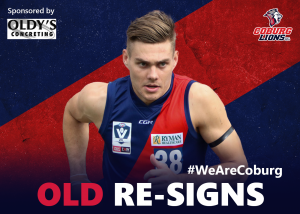 Following yesterday’s news of Tyson Lever re-signing with the club for the 2020 season, the Coburg Football Club are pleased to announce that Tyson Old has also re-signed for the next season.

Having arrived at Coburg from Northcote Park for the 2019 season, Old managed four games and a goal in his first VFL season.

While he wasn’t playing for Coburg, Old was back playing at Northcote Park where he performed strongly all year.

He played in 15 games kicking eight goals and being named in the best players five times.

Old found the pace of the game was the biggest difference when he stepped up from the Northern Football League to play for Coburg.

“It is a lot harder to find the same amount of time and space like you do at local level,” he said, “When there is a turnover the ball can go from end to end before you even know it.”

Old also said the decision to sign on was an easy one based on the playing group and coach.

“After listening to Sturge (Andrew Sturgess) speak on his vision for the club and how we are going to play next year, I knew I wanted to be a part of it.”

“If we stick together, who knows where next year will take us,” he said.

With another VFL pre-season under his belt going into next season, expect to see a lot more of Old in Lions colours in 2020.

Lions General Manager Sebastian Spagnuolo said of Old’s signature “Tyson is a high quality individual that can play in many roles for our team. At 23 years of age and having had a taste of VFL footy in 2019, after another strong preseason, season 2020 will hopefully present greater opportunities for Tyson to impact the VFL competition.”

Old becomes the 24th Lion to re-sign for the 2020 season and the club will make further re-singings and new signings public as they occur so make sure you’ve subscribed to the club’s newsletter The Roar by clicking here: https://coburgfc.us19.list-manage.com/subscribe?u=ee0913f601ecc0de7d1b6679a&id=a8ab8eff78