Young Queensland prodigy Simington the latest to become a Lion! 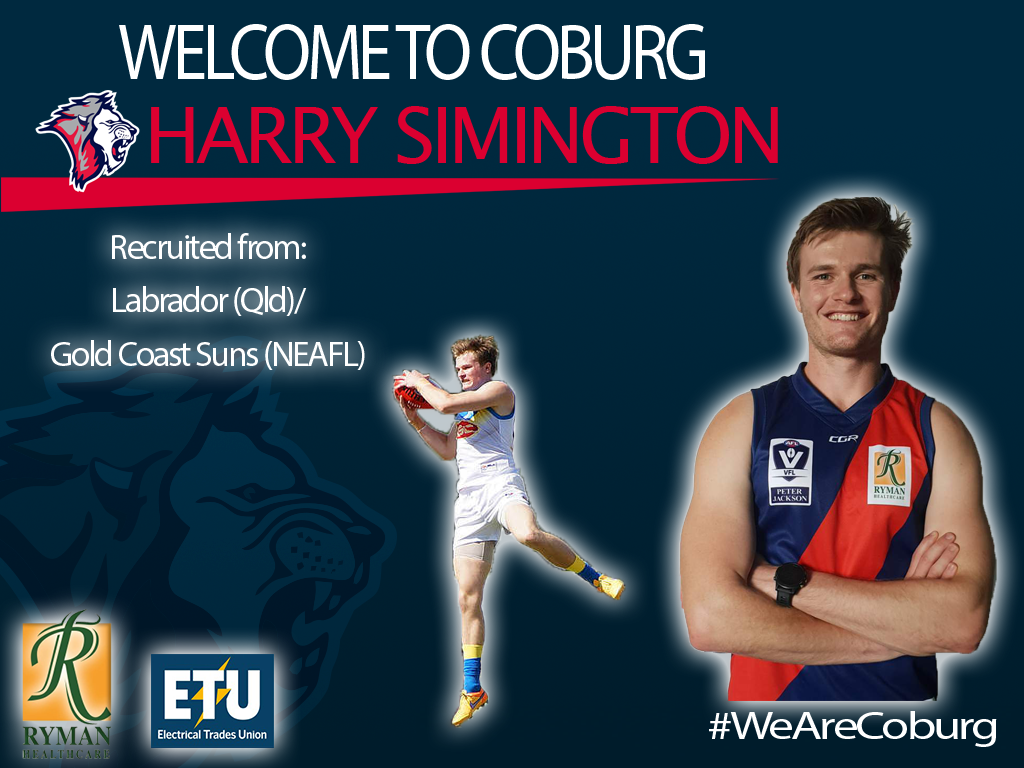 Simington, a Labrador Junior joins close mate and fellow academy member Brodie Foster at Piranha Park in 2019, having also made the move to Melbourne over the New Year period.

Largely due to injury, Simington has managed little football over the past few seasons, having suffered hamstring and foot injuries. A talented utility who provides a handy medium option at either end of the ground, he is also capable of playing in the midfield and boasts an outstanding work rate and level of endurance, and uses the ball exceptionally well. He was also Vice Captain of the Queensland Under 16 representative side in 2016.

Simington has only managed a total of 7 NEAFL games with the Gold Coast Suns in the past two seasons, however has been highly regarded by many in AFL circles, especially in Queensland and is looking forward to a fresh start with his footy, putting the last few seasons behind him.

“I had a few choices (to play elsewhere), however Coburg ticked all my boxes when it came to Coaching Staff, Medical Staff and the playing list. After chatting to Patch, I can see how I can slot into the team and the development I’ll get as a lion.”

“Coming from the Gold Coast I know Chad Owens(new Assistant Coach) quite well and I have a great amount of respect for the way he goes about his coaching, he was one of the factors when it came to making my choice. I can’t wait to work with him, as well as my great mate Brodie Foster in 2019. I’m looking forward to the challenges of VFL football, but I’ve got great confidence in what we can do as a club in 2019,” Simington said.

GM Sebastian Spagnuolo was thrilled to have secured Simington’s services for 2019.

“We’re really excited to have Harry join our club. He had some AFL interest as he went through the Suns Academy and the Allies program at under 18 level, but injuries made it hard for him to continue to develop and impress.”

“Our team at Alphington Sports Medicine are looking forward to working with Harry and his body which will allow him to impact the VFL competition for us. We see Harry being able to play some high level VFL football as a forward or even up through the midfield over time and he will be a great asset to our club,” said Spagnuolo.

Join Harry as a Lion next season, be sure to click here and sign up as a 2019 member today!

This story was first shared with our Subscribers Exclusive Newsletter, “The Roar.” Stay tuned for more news throughout the off-season by subscribing to The Roar HERE, where you can get all the Exclusive News, and up to date information ahead of the 2019 season.