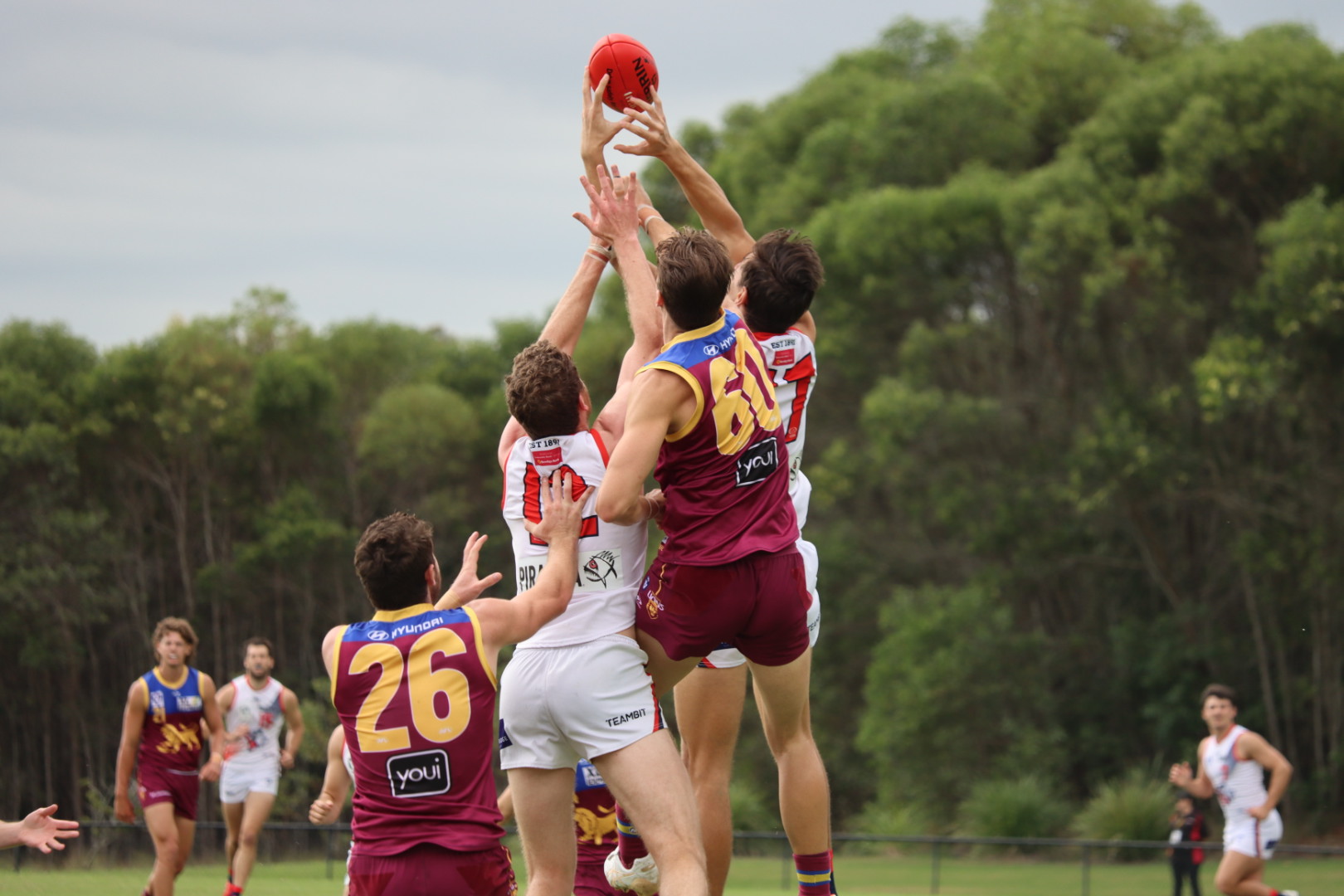 On a tough day for Coburg, they were simply outclassed by a Brisbane Lions team that was littered with AFL listed players.

Coburg’s inefficiency when going forward didn’t help the travelling side as even though they only lost the inside 50 count, 52-50, they still lost the match by 65 points with the scores finishing with Brisbane 16.13 (109) to Coburg’s 5.14 (44).

And while retiring veteran Jacob Ballard’s last match didn’t exactly go as planned, there were some shining lights for Coburg fans.

Oakleigh Charger’s key forward, Alex Lukic, made his VFL debut for Coburg today and presented well for the Lions throughout the match.

He took a strong contested mark to start the match, before a long kick into the forward line from Jhye Baddeley-Kelly allowed Lukic to get out the back to kick his first goal in the navy and red.

Coburg’s other debutant, Daniel Guccione, also had a strong start to his career as a Lion after moving over from Carlton’s VFL side at the start of the season.

The 26-year-old looked settled into his position floating across the half-back line. He finished the game with 11 disposals and six marks, many of them contested.

Brisbane shot off to a fast start in the opening minutes thanks to a set shot goal from Mitch Robinson about 45 metres out on a slight angle. The home team continued to press for the entirety of the quarter with Coburg’s defence often finding themselves under siege.

Coburg created some attacking opportunities throughout the first quarter, but the shots unfortunately only registered as behinds.

Brisbane were able to transition from defence to offence far too quickly as Coburg struggled to contain Brisbane’s swift ball movement. Which led to the home side jumping out to a 45-point lead at quarter time.

In his last game for the club, Ballard led the way for Coburg at quarter time with eight disposals.

Coburg’s start to the second quarter was far better, as they got repeated forward 50 entries, but still struggled to convert it into scoreboard pressure.

And although Coburg seemed to be doing more of the attacking in the second term, Brisbane’s efficiency when going forward burnt the away side.

But as the score line was turning ugly for Coburg, Sam Lowson, who returned to the side this week, kicked Coburg’s first goal thanks to a great crumbing snap 30 metres out from goal.

Which was followed later in the quarter when Coburg were able to find their second thanks to the debutant Lukic, who was able to run into goal to kick his first major for the club.

However, even though Coburg were able to even up the inside 50’s, they still found themselves losing the second quarter despite their forward half dominance as Brisbane kicked four goals to Coburg’s two.

The third quarter was heavily dominated by Brisbane’s classy midfielders, as the home team skipped away to a 74-point lead.

Even though the scoreboard continued to get away from Coburg their fight and determination didn’t waver as they continued to press and create opportunities.

Midfielder Tom Silvestro continued to fight it out in the centre of the ground collecting 17 possessions and kicking one goal.

While Coburg’s Adam Swierzbiolek was dominant in the ruck, amassing 32 hit outs in an impressive performance.

To start the last quarter Coburg were looking to end the game well for their retiring veteran in Ballard. And they started impressively as they went end-to-end in arguably the best play of the day finishing in Lowson’s second goal.

Lowson, was arguably best afield as he collected 17 kicks to go with his three-goal performance which featured some great small forward craftwork.

Even though the margin ended up being 65 points, Coburg were able to even up the inside 50 count and went on to win the final term kicking 22 points to Brisbane’s 13. These shining lights should hopefully give the boys some confidence heading into their next match on May 21 against the Sydney Swans, at Piranha Park.