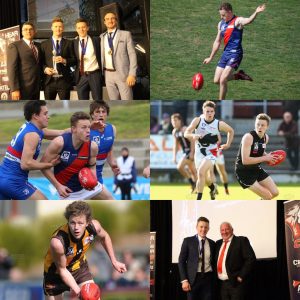 Defensive and versatile midfielder Ryan Exon will reach his 50-game milestone this weekend when Coburg take on North Melbourne.

The 24-year-old has made quite the impact since becoming a Lion at the end of 2016, having previously spent three seasons with Box Hill and one season at Frankston.

Last season was arguably his best, playing in 17 senior matches and averaging 18 disposals and six tackles per game, which saw him finish the Brad Nimmo runner-up in the Lions’ Best & Fairest count, while also taking home the Trevor Price Team Spirit Award.

With 49 senior games currently to his name, Exon can’t wait to get out onto Piranha Park on Sunday.

“I’m really excited; obviously being in my third club now, to get to 50 games is a pretty proud achievement, and hopefully we can follow it up with a win!” he said.

Having played 20 games as a Lion so far, he remembers the first win of last season as a pretty memorable match.

“My best Coburg moment would have to be the win against Sandringham, which was also my first win with the club.”

“It had been a bit of a stretch of losses, so to get the win finally was really good, and to do it with the guys and get in the middle of the huddle (was fun).”

After captaining Oakleigh Chargers to a TAC Cup premiership in 2012, Exon signed with Box Hill for the 2013 season, and was named 23rd man in their Grand Final win against Geelong after just four senior games.

“Playing in the flag at Box Hill in my first year, that was pretty special to me to come out of TAC (Cup) and get involved in a VFL premiership,” he continued.

Exon spent the 2016 season as a Frankston Dolphin, before finding a new home at Coburg.

Still looking for the first win of the season this weekend, Exon hopes the Lions can continue to see improvements as a team, while learning from one another.

“We played some decent footy (on Saturday against Box Hill); we probably played one really good quarter and then two decent ones before we fell off again.”

“If we can put together three or four really good quarters we’ll probably be more competitive in the long run, rather than getting blown out towards the end as it’s been happening the last three games.”

Come see Exon and the Lions in action for his 50th game on Sunday, with the first bounce at 1pm at Piranha Park.

Exon to Play Game 50 and Nolan to Debut in Round 4!

Match Preview: Round 4 vs North Melbourne