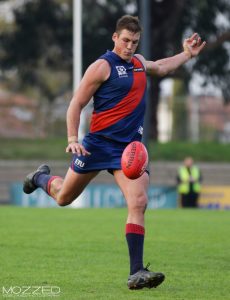 Our 2017 captain Tom Goodwin has been named to represent Victoria in the 27-man training squad, when the Peter Jackson VFL State Team takes on the WAFL at North Port Oval later this month.

Having been chosen from the initial 42-man squad, Goodwin will become just the 16th Coburg player to be selected since 1990; the last being Lech Featherstone in 2014.

“It’s a huge honour, and I’m unbelievably grateful for the opportunity to represent Victoria,” our captain said.

“I can’t wait to experience representative footy alongside the best players in the VFL, and also against high quality opposition.” he continued.

Averaging 21 hit-outs and 13 disposals a game this season, Goodwin has had a solid start so far.

And being the first time Goodwin has achieved representative selection, Head Senior Coach Peter German believes he is deserving of this chance to play state football.

“It’s a great reward for Tom’s perseverance and dedication to his football,” German said.

“The work he has put in at Coburg has set himself up to be a consistent player, which has also gained him AFL interest.”

“He will be in his element playing state football, as regardless of the level of football there’s only one way Tom goes about it: full bore.”

Coburg General Manager Sebastian Spagnuolo also had nothing but praise and excitement to say of the news, despite our two other Lions from the initial 42-man squad missing out.

“We’re really proud that Tom’s been selected to represent the Coburg Football Club, it’s very well deserved as our B&F winner from last season and our captain this year.”

“We know Tom’s going to do himself and us really proud, and hopefully he enjoys the experience.”

“It’s a great honour for him to be selected amongst very good VFL footballers, so he’ll take a lot from it and hopefully come back after the state program even better for us.”

Ben Allan has also been named as a talented developing player, and will get the chance to train alongside Goodwin and the rest of the state team.

The side will hope to end their recent losing run when they host the WAFL on May 27, with the game also broadcast live on Channel 7 from 2pm.

We wish our captain all the best, and hope he enjoys this exciting experience.

Lion of Round 5: Connor Byrne