During the opening address to the assembled crowd, Coburg FC President and club legend Kevin Breen announced that 2019 will be his final year at the club’s President. 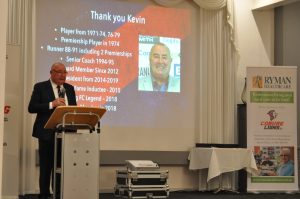 Kevin began in the role of President in December 2014 and helped steer the club through some early troubled waters after the dissolvement of the Coburg-Richmond alignment.


When asked about his passion for the club and the legacy that he leaves, Kevin said “I’m tremendously proud to have served this club for as long as I have.  The Coburg Football Club is a great club made up of great people and always will be. 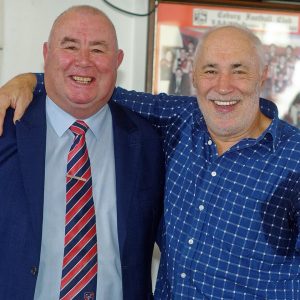 I am proud that even though our competition has changed as much as it has since I played, we still have the Coburg Football Club playing at the highest level in Victorian football and although onfield success hasn’t come our way in recent years, we are on the verge of something really special.

The people you meet along the way and the relationships that are formed make all of the hard work worthwhile.  I still aim to be at most if not all games in 2020 and beyond and helping the club by managing some functions which will see additional revenue go into the club, something that I encourage all members, sponsors and past players to do continue to do if they can.

The redevelopment taking place in 2020-21 will see our club enter a more professional and exciting era and I am envious of our current players and future players and staff that will have access to an elite facility such as the one we’ll soon have.

I want to thank everyone that has helped the club and myself along the way, my fellow Board members, our administrators, coaches, players, staff, past players committee, members and sponsors for their support. Thank you and go the ‘Burgers!”

Kevin “Skippy” Breen joined the club in 1971 from the strong Paramount Junior Football Club which were based in nearby Merlynston.  In the same year he finished 3rdin the Coburg Thirds Best and Fairest. Continual improvement won him the 1972 club’s Thirds best and fairest award for the and also the Alec Gillon Medal (VFA Thirds League B&F).

He was placed on the senior list and in 1973 made his senior debut against port Melbourne at Port Melbourne. He then placed 2ndin the Reserves Best and Fairest that same year. In 1974, at 21 years of age, Kevin was one of the youngest members of the club’s 2ndDivision Premiership.

Kevin was poached in 1975 by East Fremantle in the WAFL but his stay in WA was short lived and he returned to Coburg at the start of 1976, going on to win the Reserves Best and Fairest in 1977. 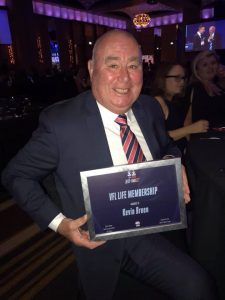 In 1978 he won the club’s outstanding services award and also reached 50 senior games. Kevin continued on through 1979 missing out on the selection in the VFA 1stDivision premiership side. A move to Werribee followed in 1980 where he went on to play 70 games.

At the completion of his playing days, Kevin returned once again to Coburg as the team runner and match committee member from 1988 through to 1991.   In 1992 and 93 he was the Coburg Reserves Coach and in 1994-95 was Coburg’s senior coach.

Between 1996-99 he would serve as an Assistant Coach with Hawthorn under Ken Judge.

Kevin once again returned to Coburg as a Board member in 2012 and at the completion of the 2014 VFL season, Kevin succeeded Bill Balakis as club President. During Kevin’s Presidency he has led the club brilliantly through some challenges and the redevelopment of Piranha Park will come to fruition in 2021 on the back of Kevin’s petitioning and hard work.

‘Skippy’ was inducted into the Coburg FC Hall of Fame in 2014 and in September 2018, Breen was awarded VFL Life Membership for his services to the competition & subsequently would also be elevated to Coburg FC Legend status.

The club is truly in debt to Kevin for his services over 48 years as a player, coach, runner and President and we know that he’ll always be around the club that he loves to continue to advocate for a bright Lions future. 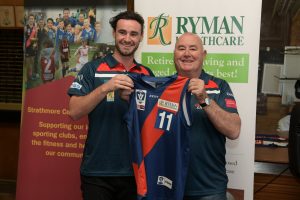 In 2020, Kevin will remain an active part of the club by helping the club administration with special events aswell as support Kerin Lawson and the Past Players and Officials committee when required.

At the 2019 Coburg FC Annual General Meeting on Monday 9thDecember a new club President will be elected, more information about this will be communicated as the event approaches.