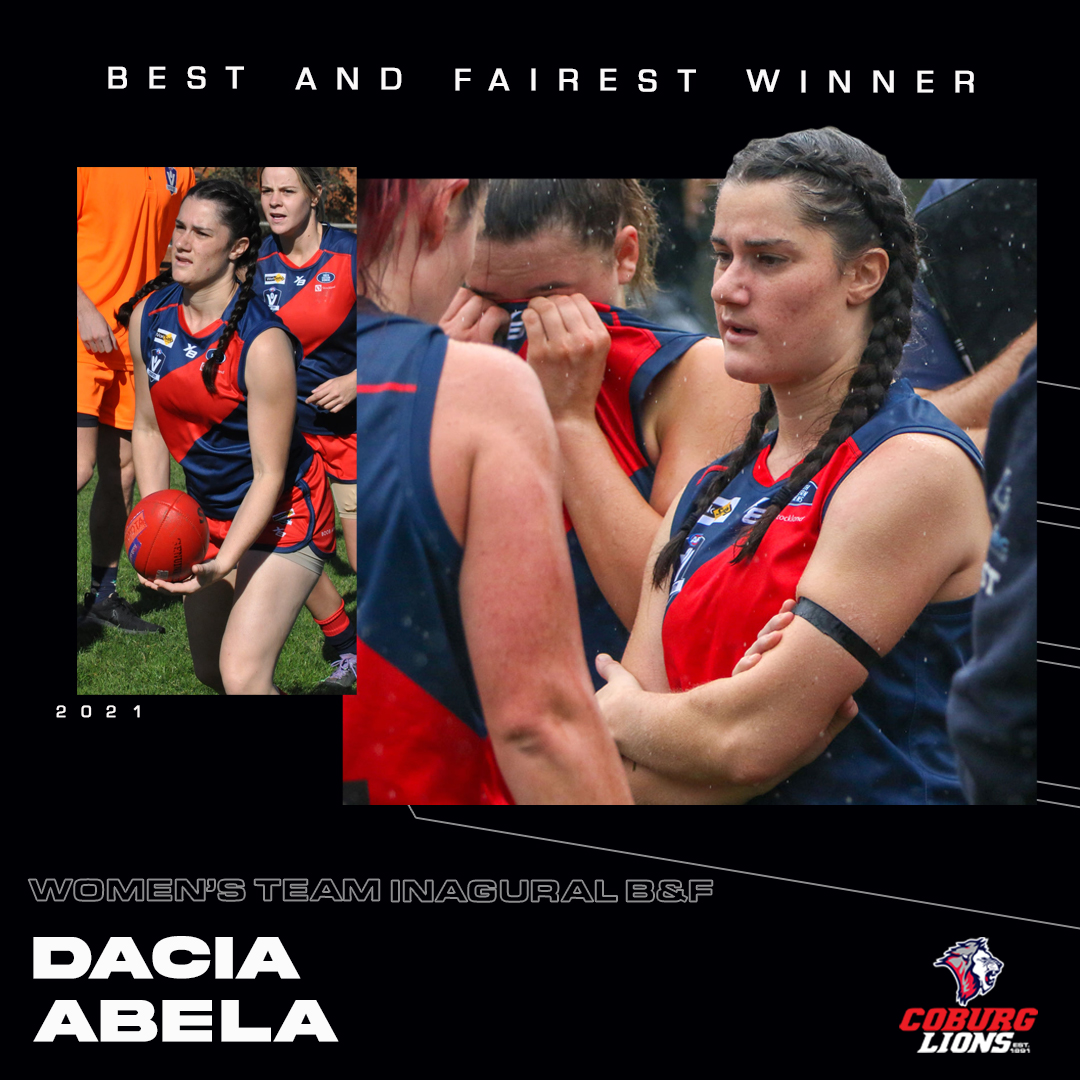 Dacia Abela has been crowned the Coburg Women’s Best and Fairest winner in a tight contest that separated first and second by only two votes.

Coming across to the Lions from the Yarraville-Seddon Eagles in the WRFL (Western Region Football League), Abela is no stranger as being a high performer for her team, pooling in second for their best and fairest count in 2019 behind current teammate Kristelle Vanderwolf as a midfielder. The move down back seems to have reaped its rewards for Dacia landing in Coburg’s best five times during the season.

A key pillar in the Lions defensive set up, Abela cemented her place in the best 22 for coach Liam Cavanagh’s side having played ten games during the Covid interrupted season, averaging 3.7 disposals and 3.7 tackles per game.

The ferocious defender showed no fear when attacking the ball during the season ensuring it was kept out of congestion in the Lions ‘Danger Zone’ and always hunting the player from the opposing team that had the ball in her vicinity.

Her best game came in Round 14 versus the Eastern Devils where she amassed four kicks, four handballs and six tackles in a close but losing effort against the Devils at home which saw the Lions go down by four points (37-33).

The win signifies not only the first best and fairest win for Abela but also the first for the club in its 130 years after fielding the inaugural Women’s side in the SEWFL (South Eastern Women’s Football League) competition.

Abela, who played in all the Lions’ SEWFL Premier Division games, said she wasn’t expecting to win the best and fairest.

“I definitely don’t have the most tricks in the book, I don’t kick the most goals, I’m not the fastest player but I guess that says a lot about what our coaches have valued throughout the season and hard work and consistency obviously goes a long way,” she said.

“I’m really proud and humbled to be receiving this inaugural women’s best and fairest, I really do feel like as if it could have gone to any one of my teammates.”

Senior Coach, Liam Cavanagh applauded Abela on her 2021 form stating that Abela was the team’s most consistent defender this season.

“She’s quickly earned the respect of her teammates as soon as she walked in the door for her ruthless approach to her role and her ability to comprehensively beat her opponent and play her role every single week,” he said.

“I don’t think you could find a more deserving winner than Dac, she has been an incredible team mate this year. She has embodied our values & system wholeheartedly.”

“It was really pleasing to see someone as selfless as Dacia get recognised tonight, as the nature of selflessness is that it can often go unnoticed. Having said that, it just shows well Dacia executes her role & also how appreciated she is for her contributions.”